*Free Copies of Landscape With Shipwreck 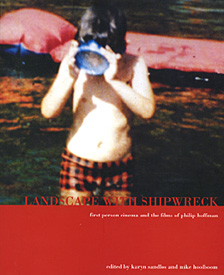 Philip Hoffman has been making personal documentary films for over twenty years. He has devoted his life to examining the narrow aperture each of us uses to bring our own experience into focus. As many of the writers in this volume will attest, telling personal stories is dangerous work.

Landscape with Shipwreck is an untidy stew of gravediggers and critics, architects and builders. In their conversion of pictures into words, each has used the history of their own naming as compass and guide. These photographs and scripts speak alongside the written word, not to fill in the gaps but to deepen them, not to make the strange seem more familiar, but to turn towards the secret task of this volume: to write what cannot be written. To write what must never be written. To uncover a kind of writing that is beside itself, and without regret.

“Philip Hoffman’s work is an encouragement to those who want to use autobiography as subject matter, personal vision as a trademark, and show how small resources can be a positive virtue.”

“Philip Hoffman is a precious resource, one of the few contemporary filmmakers whose work provides a bridge to the classical themes of death, diaspora, memory, and, finally, transcendence. As Landscape With Shipwreckmakes clear, Hoffman explores these most Canadian of themes without grandiosity; instead they emerge from stories held close to the ground, the family, and personal experience, whether at home or in very unfamiliar places indeed. And he does so through a constant renovation of method that enriches the viewers’ ability to grasp how film form contains and conditions meaning. This is just the sort of human voice articulated through film that we desperately need amidst the thunder of corporate media in all forms.”

“Philip Hoffman’s films are a revelation for those lucky enough to see them. At once literary document and visual archive, Landscapes With Shipwreckadvances contemporary thinking about Hoffman’s films and the autobiographical documentary tradition in Canadian cinema.”

Free Copies of Landscape With Shipwreck