“The Saugeen River was named Sauking, ‘where it all flows out,’ by the Ojibwa in the early 1800s. It runs into Lake Huron, in central Ontario. The place where I know it is twenty miles south of Owen Sound, near Williamsford, where I spent lots of time in my youth exploring. Over the past twelve years I’ve returned there to film, and collected these moments in a fifteen minute meditation called simply, river.

In 1997, I arrived with a wind-up 16mm Bolex and one roll of 16mm colour film; in 1981 with a half inch, reel-to-reel black and white video portapak; in 1984, indoors now, I used a rear screen set-up to copy the footage shot in 1979, another return. Finally, in 1989, I went for the first time beneath the surface of the water, the 16mm camera loaded with the ‘mysterious’ black and white hi-con printer stock. The film is an archaeology of how I have come to know this river over these years.”

“river is a geographical portrait photographed over the course of a decade in three distinct styles, it is a meditation on natural flux and the inexorable temper of change, and the way technology mediates our encounters with our environment. It marks, above all, a return to a childhood pastoral retreat. river’s first movement shows a fishing excursion, the lush hues of a sun-inspired afternoon drifting easily in the glassy mirror of the river’s flow, its restful solitude untroubled by the ravages of an industrialized south. Humanity is glimpsed in edges and peripheries; a paddle drips concentric rows along the water’s surface, a hand lowers anchor; a fly is cast against a soaring treeline. These passages are silent, meditative, and idyllic—a chained series of lap dissolves easing the passage of an afternoon’s watchful rest. The second scene is markedly different. Photographed in black and white video, it is a continual trek downstream, its overexposed image granting a sublime and unearthly quality to the illuminating glare overhead. But because the microphone rests on the boat’s bottom, and because it is rudderless, left to follow the river’s current while Hoffman stands filming on the prow, the boat soon encounters a variety of natural obstacles—trunks and rocks arise from the river’s surface to impede passage. And with every obstacle there is an excruciating and hilarious sound of scraping and bumping—a sound that stands in distinct contrast to the sublime reflections of the scene. The sound marks this movement as a pastoral slapstick, its romantic inclinations betrayed by the physical evidence of the voyage itself. The third movement draws its opening sections together, refilming the lyric impressions of the opening off a rear screen employing the same crude black and white camera used to photograph the flotational trek of the second movement. A looping track of natural sounds augments the scene, its piercing bird cries and shrill advances denoting the untamed underlay of these pastoral quietudes. The final movement runs inside the river itself, diving below water to glimpse the sunstroked grounds of its descent, aqueous fronds waving in the light of afternoon. Sharp movements abound here, in contrast to the easy frames of the first passage or the slow-moving drift of the second. The camera darts beneath the waves in a gestural cadence finally extinguished by a blinding white light, then seeks its source of illumination in a blank passage that signifies beginning and end, the addition of colour, the simultaneous occurrence of all experience, the filmic equivalent of the sublime.” (Mike Hoolboom) 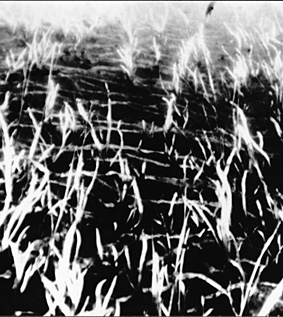 Notes on river by Philip Hoffman