“The subject, the filmmaker/diarist, whose consciousness encompasses this flow or passage of time, uses failure to make his strongest points about the convergence and intermingling of anticipation and event, experience and memory. Setting out to capture experiences of previous trips, he instead meets    disappointment and frustration with events and people who do not fulfil his expectations. Spurred on by the mythology of Jack Kerouac and his life on the road, the travellers visit ‘Beat’ photographer/filmmaker Robert Frank who matter-of-factly dismisses their quest by noting that Kerouac is dead and the Beat era is over. In a partial response to the shattering of the myth, the filmmaker goes back over the ground of the journey once again, only this time he includes the frustrations, dead-ends and low spots. The final sequence of the film marks a re-evaluation. On the beach where the road ends discontinuity becomes a virtue, a form of concentration that validates exceptional experience, just as recollection and anticipation validate certain memories and fantasies.” (David Poole)

“In making this film I collected images and sounds over six years of travel (not continuous) through Canada. Keeping daily both filmic and written records, I focused on people and places, my relationships to them, and the changes that occurred between each visit. I would collect these images freely: later to examine and make meaning of during the editing process. In this film I started to consciously pursue the relationship between a formal chronicle of events and my memory of those events.” (PH) 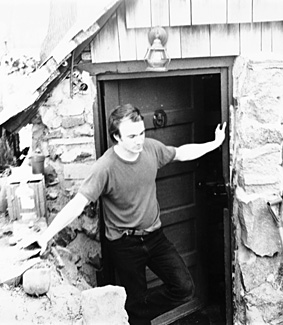 “The Road Ended at the Beach is a collage of film footage, sound tapes and photographs recorded by Hoffman on four journeys over a seven year period. The documents represent a naïve impulse to record “significant” events: a picturesque sunset, a visit with Robert Frank, an accident on the highway. The act of linking together records of past journeys becomes for Hoffman a new odyssey in itself, a journey toward self-discovery built upon documents of the past.” (Shelley Stamp, “Systems in Collapse,” A Newsletter Called Fred, March/April 1985)

“The Road Ended at the Beach is a road movie whose arrested movements of traversal permit the secretions of other trips to gather alongside this one, the whole conjoining into an examination of male myth. Setting off for Canada’s east coast, Hoffman joins two friends, fellow filmmaker Richard Kerr, enlisted as sound recordist, and Jim McMurry, driver of the van. Road’s opening sequence finds them bent over the van, painting over its psychedelic glyphs with a fluorescent orange. Each of the “characters” is introduced through flashback—McMurry as the manic, fast-talking, blues-singing driver of past trips, Kerr as a fishing pal and filmmaking companion. In Ottawa they meet up with Mark, a friend who used to play jazz trumpet but now blows in a military band. “There’s things you do for love and there’s things you do for money,” he flatly intones as the travellers move on, meeting Conrad Dubé, a cyclist since 1953 who has crossed the globe eight times, barely able to speak due to infantile paralysis. In Sable River they find Dan, a friend from film school now working in the east coast fisheries, trapped in a dead-end job in order to support his family. They push on to Cape Breton where they find Robert Frank, avatar of Beat romance and adventure, the irascible photographer whose book The Americans undraped a mythic travelogue of brutality and naked encounter. But he appears before them on a distinctly human scale, and they stand together as four strangers feebly attempting to speak, their visit inspired by nostalgia over a time they never had. Frank’s visit marks the end of Road‘s first movement, an eastwards passage whose outlook rested squarely in the rearview mirror, as if the burden of memory lay so heavy on the roadside that this was a journey of time instead of topography, or the speed of the van was unable to match the speed of the present. Road’s second movement opens with the remark, “Now I look inside the van.” Once again each of the three characters is introduced—the filmmaker lost in a reverie of Kerouac adventures, McMurry obsessed with the wretched condition of the van, and Kerr feeling imprisoned. “I expected adventure, but somehow the road had died since the first trip west” is a summary capsule of the sentiments expressed here, the movement of the present haunted by past communions which now lie in ruins. Today the trip serves only as a reminder of a tripartite separation, of the passing of youth, and an exclusively male fraternity. The third movement, entitled The Road Ended at the Beach, features a reprise of the film’s encounters and Frank’s weary responses to questions about his Beat relations of two decades before. “Maybe it was freer because you know less. I never kept in close contact with them. Sometimes I see Allen…” These offerings mark an eerie prophecy for the three travellers, whose time of abandoned locomotion is past. The din of the road can no longer disguise the fact that they never learned to speak with one another, relying on the interminable displacement of the highway to elude the intimacies of discourse. The film ends with the promise of its title: children and dogs moving back and forth across the sand as a massive rocky outcropping peers out of the waters in the distance. These planes of play, passage, and foreboding are a metaphoric glyph for the film’s journey. Road is a passage from innocence to experience, cast before the paternal backdrop of a Beat pathology, its romantic notions of flight decomposed here in the cold frame of the van. Its movement from nostalgic recollection to present-day encounter frankly demythologizes the renegade escapes of fraternal fantasy, and lays bare the emptied postures of a mute masculinity.” (Mike Hoolboom)

The Road Ended at the Beach by David Poole 1984

Philip Hoffman: A Life In Films by Ilppo Pohjola

A Conversation with Robert Frank, May 1980, Mabou, Nova Scotia