“Philip Hoffman has devoted himself to filmmaking as a personal undertaking, and done so in the belief that personal refers to images, incidents, places, and persons who surround him and form part of his own life. Over the past ten years, he has made a remarkable series of films-including The Road Ended at the Beach (1983), ?O,Zoo! (The Making of a Fiction Film) (1986), and passing through/torn formations (1987)-that confront issues of cinematic autobiography, and sometimes cannily skirt them or play with the conventions of telling the story of a life. This cycle by its definition has had to concern ideas of family and home. As passing through/torn formations concerns his mother’s family heritage, Kitchener-Berlin revolves around his father’s family hometown. The slash and the hyphen in the titles suggest both severance from the past and connections to it, an ambivalence that is especially poignant for the descendants of the area’s German settlers. The history of the area underpins the film, but refuses to bind it or restrict it from free association. Hoffman assembles a wide range of visual materials, including home movies, television news footage, and archival film, as well as his own characteristically enticing images, to build complex layers of superimpositions analogous to the impressions of memory. The film’s opening segment, “A Measured Dance,’ is fluid and seductive, with deliberate and rhythmic camera movement and complex editing. Its second part, “Veiled Flight,” (introduced with an astounding “Prologue” drawn from archival sources) is more enigmatic, turning inward with the visual metaphor of underground exploration, and suggests the extent to which filmmakers are engaged in the work of making ghosts of the past for the future.” (Blaine Allen) 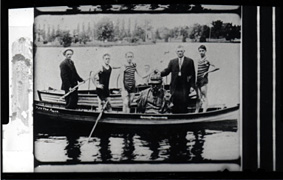 “Kitchener-Berlin is a tale of two cities divided by history, language, custom, and four thousand miles of air travel. Their alliance stems in part from a German migration that would settle on the small Canadian town of Kitchener as the locus for dreams of a new world. Before its renaming which followed the catastrophes of WWI, Kitchener was known as “Berlin,” so the film’s title also names a relation between cities separated by an alphabetic recess that secretes history’s hidden postures. Kitchener-Berlin is a naming of recall, a movement into the city’s Germanic traditions, and its rituals of memory, bereavement, and technology. It is Hoffman’s most frankly “poetic” film, employing image phrases across a wordless field of interlocking fragments, gathering the sum of a diary travel in overlapping movements that quietly course through a rectangle of introspection.

Kitchener-Berlin is a voyage at once personal and political, begun with movies of home, of children unwrapping war toys with unbridled delight as rockets flare over Germany, reducing its domestic interiors to a shatter of rubble and blood. While the Christmas scene is from the 1960s, it carries the echoes of a war fought two decades before, a war which has returned home underneath the tree.

Hoffman introduces archival photographs of old Kitchener, showing men on the hunt and the building of the main street, while inside the cathedral, candle-lit processions prepare a child for baptism. The only accompanying sound is a church bell inexorably tolling. It is a call to witness, a plaintive demand for gathering, so that we might stand once more before the wounds of the past.

Hoffman enters present-day Germany armed with a Steadicam—a gyroscopic device that permits the camera to float smoothly through space. He guides its disembodied presence over the cobblestones of Berlin, their mortared rectangles forming the foundation of centuries. It floats past tourists lying in wait, cameras at the ready, caught in a slow-motion stare of anticipation in locales previewed in travel guides and brochures. They wait before a massive church front as if for history to materialize, as if the momentum of gestures finished long before holds their travel in check, forcing them to mourn the passing of the invisible and unseen. These moments collect in a multiphonic exchange, two and three images appearing simultaneously, the technocratic ghosts of empire overlaid with the Pope’s native mission, the apparatus of the father lending shape to a burgeoning cavalcade of memories and mediation.

Kitchener-Berlin is interrupted midway by an archival Canadian film made by Dent Harrison in the twenties entitled The Highway of Tomorrow or How One Makes Two. Harrison arrived in Canada penniless in the early part of the century and invented the rotating oven, allowing bakers to make bread without burning it. With the proceeds he bought a motion picture camera and eventually made what Trap Stevens, archivist at the National Film and Sound Archives (a man Hoffman has worked with for years) calls “the first Canadian surrealist film.” Hoffman inserts this movie with few changes into the second half of Kitchener-Berlin.

It shows a dirigible leaving England for Canada, its phallic girth promising the technological fruits of empire. After landing, the filmmaker/pilot steps into the editing room with his double—a twin manufactured through trick photography—and together they pore over images of the trip. They thread a projector and turn its historical spotlamp into the waiting lens of the camera, marking the beginning of Kitchener-Berlin’s second movement, entitled A Veiled Flight. This discontinuity of events is occasioned by miners working underground. Their movement unearths bridesmaids and horses, family rituals of touch, an Imax film-shoot staging native rituals, and the filmmaker himself, crouched over his desk in contemplation. It closes with a cave ceremony lit by candles; the furtive rock etchings are a reminder of private manufactures where the division of signs and the events they depict seem less inevitable than today. A Veiled Flight is also comprised of marks like these, expressionistic outpourings that represent an unconscious flow. It is an expiration of memories redolent with mythology and association, a rite of purification that looks to begin again beneath the earth’s surface, in the shadowy enclosures of histories that may be shared without being understood. This film asks that its two halves be brought together like the two names of its title—the haunting historical stalk of its opening movement joined with the unconscious lure of the second, both combining to frame a portrait of ruin and restoration.” (Mike Hoolboom)

Kitchener/Berlin: Or How One Becomes Two (Or None) by Steve Reinke