The most important Canadian film made in 1987 will  not be playing in a theatre near you, neither subject to those journalists charged with turning images into verse or to an audience whose unflagging allegiance to  American stars has so recently nurtured Mulroney’s latest sell-out of Canadian theatres. Instead this brilliant meditation on violence must be relegated to the backwaters of Canadian expression, unwilling to con form—to change the how of its expression to suit Telefilm’s turning of Canadian light into American money.

A turn of a different sort has been negotiated by a group of filmmakers belonging to the Escarpment School, so named by Zone Cinema founder Mike Cartmell. Born and raised along the steep slope of the Canadian escarpment (or else subject to its looming beneficence in Ontario’s Sheridan College) the filmmakers are technically adept, well versed in experimental film (most are teachers), inclined towards autobiography and landscape, work in 16mm and have joined the formalist traditions of the international avant garde with the Canadian documentary tradition. Their works have moved from a lyrical formalism to a concern with the nature of representation and the reconstruction of the autobiographical subject. Central to the emerging mandate of Ontario’s Escarpment School has been the work of Philip Hoffman.

Hoffman’s sixth film in ten years, passing through/torn formations is a generational saga laid over three picture rolls that rejoins in its symphonic montage the broken remnants of a family separated by war, disease, madness and migration. Begun in darkness with an extract from Christopher Dewdney’s Predators of the Adoration, the poet narrates the story of ‘you,’ a child who explores an abandoned limestone quarry. Oblivious to the children who surround, it is the dead that fascinate, pressed together to form limestones that part slowly between prying fingers before lifting into a horizon of lost referentiality. The following scene moves silently from a window drape to enfeebled grandmother to her daughter, patiently feeding her blood in a quiet reversal of her own infancy. Over and over the camera searches out the flowered drape, speaking both of a vegetable life cycle of death and rebirth and the literal meaning of the word ‘apocalypse’ which means the tearing of the veil or drape. The film’s theme of reconciliation begins with death’s media/tion—and moves its broken signifiers together in the film’s central image, ‘the corner mirror,’ two mirrored rectangles stacked at right angles. This looking glass offers a ‘true reflection,’ not the reversed image of the usual mirror but the objectified stare of the Other. When Rimbaud announces ‘I am another’ he does so in a gesture that unites traveller and teller, confirming his status within the story while continuing to tell it. It is the absence of this distance, this doubling that leads the Czech side of the family to fatality.

Each figure in the film has a European double, as if the entry into the New World carried with it not only the inevitable burdens of translation (from the Latin ‘translatio’ to bear across) but also the burden of all that could not be said or carried, to all that needed to be left behind. There are two grandmothers in the film—Babji, dying in a Canadian old age home and Hanna whose Czech tales are translated by the filmmaker’s mother. There are likewise two grandfathers, Driououx married to the dying Babji in Canada and Jancyk, shot by his own son after refusing to cede him land rights. This son is returned to the scene of the shooting by Czech authorities and asked to recreate the event for a police film three months after the shooting. Unable to comply he breaks down instead, poised between death and its representation.

Hoffman’s imaging strategies recall the doubled tracks of American avant gardist Owen Land. An avowed Christian, Land posits a simultaneity of expression as the precondition for conversion, parodied in Land’s own Wide Angle Saxon. But while Land’s conversions transform the institutional settings of auto shows, instructional films and supermarkets into sites of individual revelation, Hoffman’s turning is a movement away from the violence that has marked past generations, using home movies to reshape the way history reproduces its truth within the family.

The darkroom, a ceremony of mixing potions, gathering up the shimmering images, the silvery magic beneath dream’s surface. In the morning Babji would tell us what our dreams meant, and then stories of the ‘old country’ would surface, stories I can’t remember… now that she’s quiet, we can’t hear about where it all came from, so it’s my turn to go back, knowing at the start the failure of this indulgence, but only to play out these experiments already in motion. passing through/torn formations

This connection between things made in the dark: doesn’t this aspiration lie at the heart of every motion picture? We can say this for certain: that this darkness has occupied the centre of Hoffman’s film work since Somewhere Between Jalostotitlian and Encarnacion (1984). While Somewhere Between moves around his real life encounter with a boy lying dead on the Mexican roadside the boy is nowhere to be seen; Hoffman relates his death in a series of printed intertitles that punctuate the film. Similarly, midway through ?O,Zoo! (The Making of a Fiction Film) (1986) an elephant’s heart attack is related in voice-over while the screen remains dark and the voice explains, somewhat abashed, that showing its death would only exploit his subject.

Hoffman searches out the reasons for his wanderings in the home he never had, in the place of his conception, in a Czechslovakia ravaged by plague and occupation. That he should bear the stamp of this history,  without a glimpse of the death camps that would claim his ancestors or the soil that had nourished thousands of his forbears recalls for us the movement of this film around a figure that is hardly seen. The filmmaker moves in his place—drawing his camera over the places ‘he’ could never go, looking for reasons ‘he’ could never guess in his restless quest for a perfect game and the delirium of the accordion.

He stares out. Fingers pound the keyboard. Magically. Melodies repeat. Again and again. Fingers dissolve into fingers. He was past the point of practice. The music was a vacant place to return to. Over and over. His playing gave him passage. passing through/torn formations 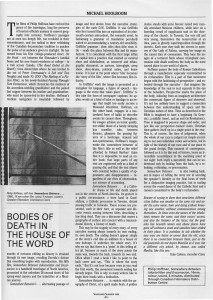