“Philip Hoffman’s ?O,ZOO! (The Making of a Fiction Film) uses a diary format to skirt along the edge of someone else’s filmed narrative (Peter Greenaway’s A Zed & Two Noughts), and to trace the anatomy of pure image-making. ‘Pure’ is both the right and the wrong word: Hoffman is a man addicted to the hermetic thisness of filmed images, and plagued by the suspicion that these images, far from being pure, are really scabs torn away from the sores of the world. Found footage shot by his grandfather (a newsreel cameraman) is the starting point for Hoffman’s meditations on the illusion of visual purity, and on the distance between the ‘neutral’ image and the value-laden narrative that it can be made to serve. It is a moral distance, one that this filmmaker surveys with a wary fascination.” (Robert Everett-Green)

“The success of ?O, Zoo! (The Making of a Fiction Film), the film that brought Philip Hoffman to international attention, marked the shift in Canadian experimental film in the eighties away from structuralism toward a more personal cinema. Begun as a documentary on the making of Peter Greenaway’s A Zed and Two Noughts (1985), Hoffman’s treatise on reality as a construct turns conventional documentary film practice on its head. Familiar codes give way to family memories that, in turn, merge with personal reflections until the whole notion of a collective truth collapses. The result, in which the facts are suspect and fiction seems to be the only thing we can count on, is a brilliant statement on the fictions spun throughout our lives. ?O, Zoo! received a Genie Award nomination for Best Documentary and won the Grand Prize (Experimental Film) at the Athens International Film Festival.” (Canadian Film Encyclopedia, Chris Gehman)

“Philip Hoffman uses the pretext of shooting a documentary on the set of Peter Greenaway’s A Zed and Two Noughts to pursue his investigation of the medium. Hoffman continues the odyssey-diary he began in his earlier films of trying to assign coherence and meaning to the fragments of truth defined as experience. At the same time, he is deeply influenced by Greenaway’s approach to the documentary, which is to say, a cross between experimental and a near total rejection of the traditional form. ?O,Zoo! is a metaphor, the filming of the filming of a fiction film. It is also a puzzle, whose pieces, once together, lend themselves to reflect a picture of dissemblance.” (Gary Evans, 1986 Grierson Seminar)

“In ?O, Zoo! Hoffman grapples with the Griersonian legacy of Canadian documentary cinema. Largely shot around the production of Peter Greenaway’s A Zed and Two Noughts, the film constructs a labyrinthean fiction out of “documentary” materials, and places the story of a death at its unseen centre. Witty, contrary, and exquisitely photographed, ?O, Zoo! was nominated for a Genie Award in 1987. (Chris Gehman, Images Festival Catalogue, 2001)

“Phil Hoffman’s excellent ?O, Zoo! which is one of the four films being shown this Thursday night and next at Innis College, is ostensibly a documentary on the production of Peter Greenaway’s A Zed and Two Noughts, but such knowledge is inessential since the subject of the documentary is never mentioned by name. Indeed, the emphasis of Hoffman’s film is not placed on the Greenaway project in the least, and there are none of the familiar staples of the “documentary on filmmaking” such as the interview with the director and stars, explanation of plot, and so on. There are a number of shots of the actual filmmaking process, but these serve to remind the audience that something similar to what is happening in front of the camera must also be happening behind it; that is, Greenaway’s work becomes the impetus for a reflection on the circularity and intertextuality of the cinema itself.

Hoffman’s film plays on the edges of narrative, and that’s because it is mostly concerned with memory and often memories are disturbed narratives, stories that rely on our willingness to fill in certain gaps to make them work. One of the primary ways to assist the work of memory in modern times is through photographs or movies. Parents make videotapes of their children when they’re young, so that later it will be possible to remember what they were like. But what does it mean when the film or tape acquires a life of its own and starts to tell the viewer things that don’t mesh with the other memories of old grandfather? It’s at this disturbing point that Hoffman’s film begins, continually using the dichotomy between the past tense of the narrator’s voice and the present tense of the images on the screen, spiraling further and further down into memory until it finally comes to rest with a shot of a young boy and an old man walking across green field-a shot that has the flickering dimness of an old home movie. Memory and image converged and whatever borderlines there were are hopelessly lost.” (“Innis films: when the eye stares back at you” by David Weaver, Varsity, Dec. 10, 1986) 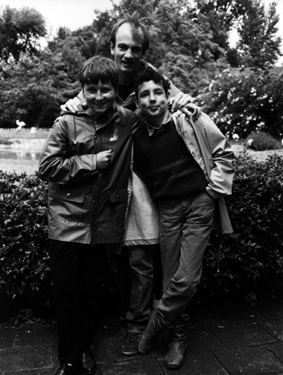 Deception and Ethics in ?O, Zoo! (The Making of a Fiction Film) by Michael Zryd (Microsoft Word)

On (Experimental) Film by Barbara Sternberg

?O Zoo!: The Making of a Documentary Film Music by Tucker Zimmerman

With Genie-nominmated under his belt, filmmaker now hopes for recognition, by Debbie Wattier