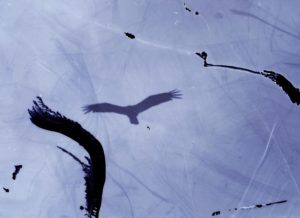 Experimental Film and Photochemical Practices by Kim Knowles: “Sections of the film were processed and tinted with a variety of flowers, fruits and plants from around the farm –magnolia, hyacinth, hydrangea, daffodil, rhododendron, pond algae, hosta buds, wild garlic seeds, tansy, aster, echinacea, sunflower and walnut. From this perspective, vulture, is more than just a visual appreciation of the land; it is a complex material engagement with an ecosystem that draws out the expressive possibilities of living things beyond conventional forms of representation. Over a shot of a flying bird, we hear a child relating fragments of information about vultures and their hunting habits. `Vultures live together, and they don’t fight, they help each other’, says the child. `I didn’t know that’ replies Hoffman. Behind this simple exchange lie multiple layers of signification that testify to the intellectual and spiritual depth of the film, and, at the same time, point towards a philosophy of collective nurturing that quietly runs under the surface of the Independent Imaging Retreat (aka Film Farm).”

`vulture’ sets its sight on farm animals and their surrounding flora. Static shots and slow moving zooms, follow the grazing animals in their minute inter-species exchanges. When left to roam together the sensibilities of these “beasts” are allowed to surface.

The film was shot and processed with various means including flower/plant processing carried out as blooming occurred, from 2016-18,.  In some cases a salt bath was used for fixing the film which was left soaking in the dark for 3 days.

Vultures hover over the barn, from high, with razor sharp eyesight, and a keen sense of smell. Together, they stalk and share their decaying sustenance. Intense acid in their stomach allows them to digest great quantities of their dead prey, without falling ill. -Ph

“for its beauty, the perfection of the relationship between sound and image, its radical concept of cinematographic time, the sophistication of the montage, but above all, for its non-negotiable commitment to the essence of cinema – the image in time – and the didactic and community context that it generates around its work”Fugas International Jury, Documenta Madrid:  Haden Guest, director of the Harvard Film Archive, Dora García, artist and filmmaker, and Raúl Camargo, director of the Valdivia International Film Festival (Chile) 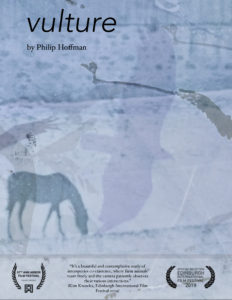 Kim Knowles, Edinburgh International Film Festival 2019: Last year we celebrated Canadian experimental film, showcasing works that have emerged from Phil Hoffman’s Film Farm – The Independent Imaging Retreat in Mount Forest, Ontario. This yearly gathering is an important example of the alternative communities that both emerge from and facilitate the continuation of photochemical film practice. This year, Film Farm celebrates its 25th anniversary, and we’re honoured to welcome Phil to Edinburgh with his medium-length vulture. It’s a beautiful and contemplative study of interspecies co-existence, where farm animals roam freely and the camera patiently observes their various interactions. Shot on 16mm film and processed with plants and flowers, it’s also an exercise in eco-sensitivity on so many levels.

Jordan Cronk, Off the Grid  (on Hoffman’s vulture) in Cinemascope 2020, MDFF Selects, TIFF Bell Light Box: Nature plays a different but equally ominous role in vulture, an unassuming yet sublime featurette by veteran Canadian filmmaker Philip Hoffman. Assembled by the director over a period of two years, the film comprises 16mm footage shot on Hoffman’s farm in Mount Forest, Ontario that the filmmaker then photochemically processed with natural plant and flower pigments, resulting in a roughhewn, multivalent display of richly tinted and textured celluloid. To hear Hoffman tell it, his analog approach to cinema is part and parcel of a universal cycle of survival and sustainability; like a vulture, his film feasts on the very elements of its production, finding aesthetic nutrients in its every ingredient.

Andrew Robertson, Edinburgh International Film Festival 2019: Vulture is not an easy film, one shot through with the materiality of film. Though it’s only the credits and the programme notes that will tell you, it helps to know that its celluloid was processed with natural dyes and other substances extracted from a bank of flowers, a process that has embedded itself in scratches and flickers and streaks projected upon the screen. There are experimental films that do not with them bring warnings of strobe nor squalling tones somewhere in the electronic sonic region but this is not one of them. The chemistry of film and filming is such, though, that it makes something special.

In much the same way that even cover versions of Cage’s 4’33” tell us something about the environment of performance, Vulture is contextualised by cinema performance. A sunny day outside is heard rather than felt in the chuckling wind through flowers as those passing by the emergency door contribute. Shots of watering hole beef and pork still ambulatory as animals with the silent shining of the projector give audiences the chance to hear the meat around them sough and whistle, the suckling of a pig at bovine teat as easy a reminder of (un)nature as the three (by my count) who had enough and made their way back to the world.

Vulture hangs, slow zooms to pigs in hollows, an agricultural oasis surrounded by goats and chickens and horses and tractors and rare human forms and shot by shot there is a sense of place – this wall is that wall, that shadow is here, the trailer brings the horses takes the horses, that wall is this wall. Multiple exposures themselves invite an almost aggressive recontextualisation, the cough and creak of chairs and sitters and the clatter and bark of fit and fitters from neighbouring construction. It overwhelms in places, like a black pudding supper, as much batter as bludgeon and heavier in place.

Philip Hoffman’s work is a textbook Black Box entry, light goes into film, picture comes out. There are processes at play and hints thereof – and this is ever one of the delights of festival film.

There is snow and simultaneous scratches on the film and it’s hard not to think of The Eyes Of Orson Welles some stretch of shoe leather from where I am sitting. There are forms of degradation that add depth and gradation like the bubbles and blisters over and under a babbling brook, a sediment of sentiment that might be clouding my judgement. It is perhaps grain or rain upon the sunflowers, but it has hard not to turn one’s face towards it, to create meaning in a meditative geography, to fall under an alchemic charm. The screening I attended will not be the one that you go to, indeed, some who started the journey with me sought other avenues, but I do not doubt a similar transport awaits anyone who is circled by the vulture. As any child (and here one specific) will tell you, the vulture tells you where the meat is. Cracked marrow and all this is a visceral treat, though its experimental palette may be at once too much for some palates. Reviewed on: 19 Jun 2019 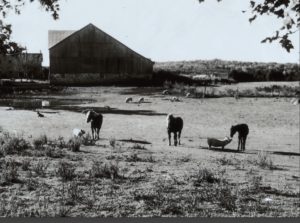 In Hoffman’s Vulture (work in progress) the farm is the space for the recording of different animals, cows, horses, chickens or pigs, in a suggestive harmony and symbiosis, however, this apparent harmonic ecosystem exists due to the absence of man, who isn’t interrupting this tranquility. In this context, the filmmaker, as the vulture of the title, is capturing (via slow zooms and panoramic shots) or waiting for the bursts which reveal this interaction of the animals in pseudo freedom: a cow nursing a pig, roosters and chickens looking for seeds in the woods, or horses riding in slow motion. But Hoffman doesn’t stay in the tale or naturalistic description, but instead confronts this gaze with the “performances” of the animals, with the scarce presence of farmers, and then with the work on crops free from animals to watch over. If this is indeed a non-finished work, the nobleness of a work like Vulture lies in its choosing of a point of view, where the filmmaker’s function is clear, as a watcher of this uncommunicated fauna, but also in the process that is patented in several parts of the film, where he goes from a use of “clean” celluloid to the contaminated (decayed) texture of flower-developed film, which gives the frame a closer touch with the absorption of the environment… In Vulture’s last minutes, Hoffman adds an appendix which has a different rhythm in its editing, executed by filmmaker Isaiah Medina…This ending subverts the initial bet (flow) to finally return with a significant shot (explosion) and a perfect epilogue, of children in a farm separated from goats by a fence. 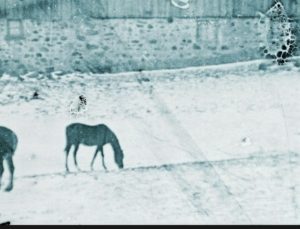