“The bus stopped on the Mexican highway, placing us in full view of a young boy, motionless, on the hot pavement. In this film, the incident is revealed through a poetic text, derived from my written journals. The poetry mixes primarily with Mexican streetscapes which compliment the text in a tonal sense. Most images are twenty-eight seconds long, the ‘breath’ of the 16mm Bolex camera. A lone saxophone (Mike Callich) weaves its way through the narrative, blending to make stronger the tomes and accentuations of the images.” (Phil Hoffman)

Somewhere Between Jalostotitlan and Encarnacion is a handheld travelogue of North America, presented in the unbroken twenty-eight-second shots of [Hoffman’s] spring-wind camera and the intertitles of a Mexican journey. Somewhere Between… is a Catholic drama of life and death played out in the streets of North America. Its gesture is a public circumstance: a horn band in Guadalajara, a Catholic procession in Toronto, distant passing traffic in Colorado. These scenes are presented, each in their turn, as separate and discrete events moving between titles describing a boy lying dead. They are a discourse that moves a geography of surface into concert with a transcendental history, a history of death.” (Michael Hoolboom, Vanguard) 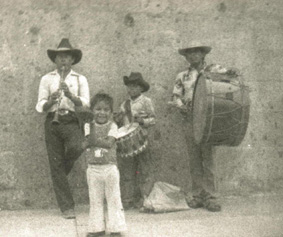 “In Mexico, during the collection of footage for what eventually became Somewhere Between Jalostotitlan and Encarnacion, a bus on which Philip Hoffman was riding stopped, and a woman came screaming across the field. Her little boy had been run over and killed by the bus. Phil watched from inside with camera in hand, trying to decide whether to film or not. He didn’t. He can attest to the event, he says it happened, but he doesn’t have evidence to back up his claim because he didn’t turn the camera on. Later, at the Grierson Seminar, Somewhere Between is screened, an entire film structured around the death of a child and the absent image of it, and a news correspondent who’d made a number of films about Vietnam approaches Hoffman: “Phil, I really enjoyed the discussion, but you know when you were in the editing room, didn’t you just wish you had the footage?” I put the camera down. The film is a cinemato-poetic account of an event, of the experience of an event, the evidentiary image of which is missing…” (Landscape with Shipwreck by Mike Cartmell)

“Somewhere Between Jalostotitlan and Encarnacion by Philip Hoffman takes us back out to the street as Hoffman builds a film around not filming a young boy run over by a truck and lying dead on a street corner somewhere between Jalostotitlan and Encarnacion. The death at the centre of the film is conveyed through text in this record of travels between Mexico and Toronto. The film engages with the things, events, architectures and emotions that carve out a place and give it a redemptive quality. Structured around three event—a horn band in Guadalajara, a Catholic procession in Toronto, traffic in Colorado—the film is a haiku of sorts, focusing on the life after death.” (Fabulous Festival of Fringe Film, Durham, Janine Marchessault)

“The film concerns Hoffman’s inability to record the scene of a young boy’s death in Mexico. The film is structured around the absence of that image we most want to see. Paradoxically, it is the absence of the photographic record which captures Hoffman’s experience of the event most vividly. The discussion following the films concerned the morality of Hoffman’s decision to record the death scene. Don North, a war correspondent who makes a living recording this kind of tragic scene, felt that the film would have been stronger with the addition of the death. What north missed, I think, was the very structure this absence provided, and Hoffman’s implied critique of North’s type of filmmaking. (Shelley Stamp, “Systems in Collapse,” A Newsletter Called Fred, March/April 1985)

“An elegy of sorts. Somewhere Between is organized entirely around the absence of an image, anticipating the more complex reworking of his fundamental notion in ?O,Zoo! memories of the roadside death of a boy in Mexico give way to layered images of a religious procession in Toronto, transforming the participants into mourners for this anonymous child.” (Chris Gehman, Images Festival, 2001)

The Value of the Parochial: Film and the Commonplace (an excerpt from a larger article publication forthcoming) by Janine Marchessault

Bodies of Death in the House of the Word, by Mike Hoolboom, Vanguard, Summer 1988

Somewhere Between interview with Phillip Hoffman by Donnalee Downe, 23 November 1984